Bal Ballentine with George Ballentine Ford, Lincoln, Inc presented Beyond Abuse’s Executive Director, Cathy Miller a check for $1800 on September 11, 2014.  The donation was made possible by Ballentine Ford’s annual August fundraiser where a buyer could select a charity to receive a $200 donation for each new or used vehicle purchased.  Thank you to Bal and his staff and thank you to the community for your support. 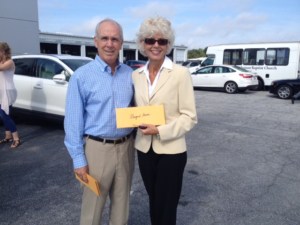 No, this is not Angel, but our own Yello Dyno taking a break from the hot sun at the recent Day of Unity held at the Brewer Complex here in Greenwood, SC.  Great way for us to increase awareness about our programs with the local community.  Thanks to Angel for representing us and enduring the heat. 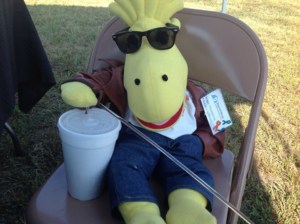 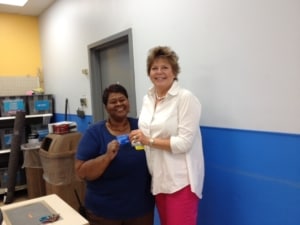 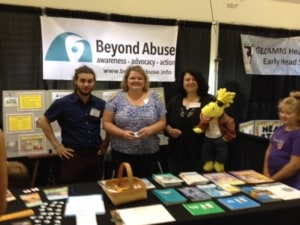 Staff members, Jessica Bell and Charlotte Ehney conducted training on July 31, 2014 for the Emergency Department staff at Self Regional Healthcare in Greenwood, SC.

The topic was Acute Rape Kits and Mandated Reporting 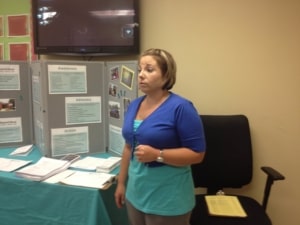 Thanks to all those who worked tirelessly to make this protocol a reality.  It is my belief that working together as a team, makes us stronger and better at serving our communities.

The results of a 2012 Organizational Assessment revealed a level of discomfort and confusion with regard to the agency name Sexual Trauma & Counseling Center and the child advocacy program name, The Child’s Place.  A Community Awareness ad hoc committee was formed in 2013 and charged with the responsibility of determining the need for a name change and/or rebranding of the organization.  Two focus groups were held in March 2013.  The results of the focus group highlighted the concerns community leaders and partnering agencies had regarding “two names” and the “harshness” of the words “sexual trauma”.  It was concluded that the name Sexual Trauma & Counseling Center no longer described the full array of services being offered to victims, their families and the community.

Professional marketing consultants were added to the ad hoc committee and the name Beyond Abuse was selected and approved by the full Board of Directors.  A nonprofit corporation articles of amendment was filed with the State of SC Secretary of State and approved on June 13, 2013.

This site uses cookies. By continuing to browse the site, you are agreeing to our use of cookies. Also, it is the policy of Beyond Abuse to provide for and promote equal employment opportunity, client services, and educational programs without discrimination based on age, race, creed, color, national origin, gender, sexual orientation, disability, marital status, Vietnam Era Veteran status, genetic predisposition, or carrier status.Beyond Abuse’s designated person to address Affirmative Action concerns is the agency's Executive Director, director@beyondabuse.info, (864) 227-1623.