Beyond Abuse staff wore denim in support of Denim Day as a part of Sexual Assault Awareness Month. Denim Day is a campaign aimed at protesting flawed and biased attitudes concerning sexual violence. It was launched after the enrage that ensued an overturned rape conviction in Italy due to the justices’ claim that since the victim was wearing tight jeans, she must have helped the perpetrator remove her jeans, thereby implying consent. The following day, women in the Italian Parliament came to work wearing jeans in solidarity with the victim. We at Beyond Abuse also stand in solidarity with all sexual assault victims. 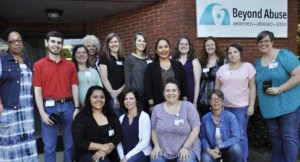 Want to join the discussion?
Feel free to contribute!

This site uses cookies. By continuing to browse the site, you are agreeing to our use of cookies. Also, it is the policy of Beyond Abuse to provide for and promote equal employment opportunity, client services, and educational programs without discrimination based on age, race, creed, color, national origin, gender, sexual orientation, disability, marital status, Vietnam Era Veteran status, genetic predisposition, or carrier status.Beyond Abuse’s designated person to address Affirmative Action concerns is the agency's Executive Director, director@beyondabuse.info, (864) 227-1623.